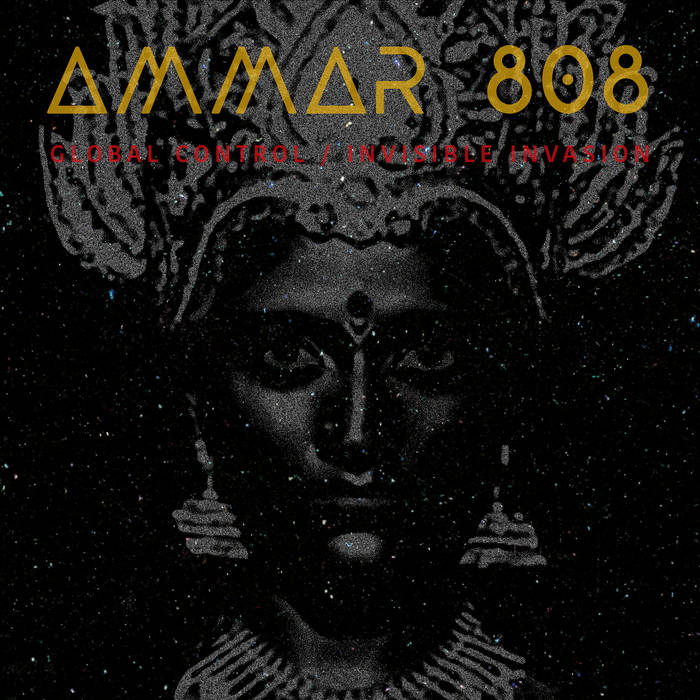 AMMAR 808’s previous album Maghreb United (2018) – a powerful mixture of deep TR-808 bass and Pan-Maghreb beats and voices – received widespread critical acclaim and shook dancefloors throughout Europe, North Africa and beyond. This time Brussels-based Tunisian electronic producer Sofyann Ben Youssef (aka AMMAR 808) has travelled to the Tamil Nadu region of southern India for a breath-taking new adventure. With a suitcase full of recording equipment, he set up base in the pulsing city of Chennai and undertook a collaborative reimagining of the area's rich and resonant musics. Ranging from trance temple sounds to rap-like street theatre performance and ending with the mathematical richness of Carnatic music, Ben Youssef’s in situ recordings form the foundation of his potent new album: Global Control / Invisible Invasion.

Life in lockdown has given us time to reflect on the world and our place in it, on fate and free will. Big ideas, and ones that sit at the very heart of AMMAR 808’s Global Control/ Invisible Invasion - an album that’s aptly-named and tooled for these times. He’s crafted them from Hindu mythology and created a philosophical jolt of a disc that sweeps him far from his native Maghreb and deep into the ancient Carnatic tradition of South India.

“When I was 20 I went to Delhi and studied for months,” AMMAR 808 explains. “I learned sitar and tabla and did a lot of recording, and I began to absorb the culture, to learn. Hinduism has a pantheon of gods, and it shows a different culture of freedom. After 2011 and the start of the Arab Spring in Tunisia, my homeland, I’ve been wondering more and more about freedom and my own identity.”

Those questions, and his exploration of them, took musical form in his mind, simmering and growing over the years until finally in 2019 he was ready to return to Chennai and record. But while the ideas are timeless, the music leans modern, with AMMAR 808 and his arsenal of analogue electronics and subsonic beats, morphing traditional legends and soundscapes into the future tense.

“I spent 24 days there,” he recalls. “I found the incredible singers and musicians through a man called Paul Jacobs. He owns the studio where I worked, and he’s a musician and producer himself; he knows a lot of people and stories.”

With such a short time available, the work was inevitably very concentrated. Yet it all went quickly; the recording itself only lasted ten days, while even the post-production barely took a month. All those years of thought had laid very firm groundwork.

“I knew exactly what I needed to record,” AMMAR 808 agrees. “I was prepared and I felt confident. But,” he admits, “I discovered things while I was there that ended up on the album, too.”

The “invisible invasion” in the album title isn’t a contemporary reference to the coronavirus pandemic.

“Not at all,” AMMAR 808 notes. “To me, in the Hindu belief system, the invisible invasion happens in the brain, the soul. We’re invaded without ever seeing it externally, and this system decrees our fate. And usually we embrace it, instead of fighting against it.” He laughs. “Then Covid-19 happened, of course, but this name precedes it. This year just emphasises how vulnerable we are.”

The virus flung us all into a dystopian universe. But that’s not unlike parts of Hindu mythology. At times, he notes, “some of the stories are like a science-fiction movie…filled with tales of global wars, gods with flying machines and divine weapons and extinction level events…a subtle and more mysterious history of mankind.”

That might seem contemporary, but it’s definitely not. Take the track “Ey Paavi,” for instance. It comes from the Mahabharata, one of the great Sanskrit epic tales of India, composed over 2000 years ago. The song relates episode where the threats of death and destruction between Bhima and Duryodhana ratchet up and up; it’s almost like hearing the rhetoric of some leaders today, yet it’s straight out of folklore. As AMMAR 808 says, “it’s a kind of street theatre.” And it’s one where the electronic melodies push harder and harder in a battle against the percussion, the lines increasing the tension.

Mythology and tradition run all through the record. “Mahaganapatim” is another name for the god Ganesha, for example, while the songs “Marivere Gati” (the first single from the album) and “Pahi Jagajjanani” both have long roots in the South Indian history. As with the music he made on Maghreb United, AMMAR 808 links the sense of what has been with what will be. Ancient myth shaped by pulsing, expansive electronics. The past given an exhilarating, kaleidoscopic reset.

Global Control/Invisible Invasion is an album of songs - some in the Tamil language which is widely spoken across the region. That’s perfectly natural, given the vocal tradition which is the chief thread of Carnatic music (as opposed to North Indian music, which is largely instrumental). It’s also quite deliberately very percussive album, another reflection of India itself.

“Rhythms are like earth and fire,” AMMAR 808 observes, “but with India you have that time calculation. I knew those rhythms; they were like a second nature to me. They’re very mathematical and architectural.” And he creates them here, creating sounds of machines to mix with the work of human percussionists as the old world and the new come together. “Sometimes the percussion idea is long, with the bass in second place; at other times the rhythm cycle can be very short, abrupt. It has a very different quality, a powerful aspect. If you have three percussion players together in a room, they can sound like 100.”

Yet rhythm and words weren’t the only building blocks. The album had to stand as a complete entity for it to work. AMMAR 808 knew he needed “the musicality. One of the differences between this and the last album is that there’s more melody here, and more rhythm in a sense. None of the quarter tones and Arabic scales. The sound here is much brighter.”

It’s certainly infectious, filled with heart and the soul, with ideas debated and considered over many long nights and seasons. Every track resonates with tightly wound passion. It’s a philosophy of life, a musical reimagining of tradition and essence, yet done with the deepest respect. It’s easy to see why that’s needed a long gestation.

“What takes time with music is the reflection, not the doing,” AMMAR 808 observes. “Global Control/Invisible Invasion has come out of many years of thinking and listening to Carnatic music. For me, everything here is a big topic. It’s been done often before, I wanted to offer something different. I was waiting for the right time.”

That time has arrived. Even though it was never intended to be that way, Global Control/Invisible Invasion offers a perfect soundtrack for these times, music to guide us as we carefully emerge, singing the myth electric, thinking and dancing, into whatever the new normal might be.

Ordering from the USA / Australia?
Due to the rapidly developing coronavirus situation, the German
Post/DHL has suspended all standard budget shipments to the USA and Australia for an indefinite period of time.
As of today, the cheapest way for us to ship items to the USA / Australia is via DHL standard. The price is 29€ and on top of that, there is an additional 6€ "hazard fee" added to all such shipments. The combined shipping total is now a steep 35€.

Bandcamp Daily  your guide to the world of Bandcamp